For a while now i’ve been thinking of Cinque Terre and how amazing it looks, and after our Finland trip had to be re-arranged for next Winter I thought what a perfect alternative to a long weekend away then Italy! Previously I’d only been to Rome (in 2011) but loved it, so the thought of being back was exciting!

We visited Cinque Terre as part of a 5 night trip to Italy, flying into Pisa Airport and heading straight there. After two days of walking we caught the train to Florence (read about it here) and ended with a night in Venice (read about it here). Each place is unique even to warrant it’s own post so I’ve split it up.

We headed on a Wednesday night from London Stansted to Pisa airport (meaning to arrive at 11pm) as the first flight the next day didn’t arrive until midday, and we didn’t want to waste a whole morning. The plan was to stay in a B&B in Pisa, check out the tower first thing in the morning and then head straight to La Spezia (where you get the regional train to the first town of Cinque Terre). BUT as we were circling above Pisa the flight was diverted to Bologna (177km away) because of ‘fog’ and after a long night at the airport we decided to skip Pisa (although Ryanair were transferring clients back whenever a coach would arrive), but got the train straight from Bologna to La Spezia.

La Spezia is the biggest main line train station to Cinque Terre, as mentioned above you can get here from most major cities near and far. We didn’t do any sightseeing here, but got the regional train from La Spezia to Riomaggiore, the first of the five town we were to visit over the next two days. The train system in Italy is amazing! Very reasonably priced, and although I printed the train times (to have an idea of when they went) we didn’t actually pre-book anything as we wanted the freedom to work to our own timetable – which worked perfectly!

When we arrived in Riomaggiore (to the ahhhs and ohhhhs of the fellow tourists) we headed down the tunnel to main bit of town and the seafront for a bit of exploring. When we were done we headed back through the tunnel towards the tourist information shop (which was shut) but followed the signs to a WC where there was another small tourist information counter open. Here the lady directed us to the beginning of the first path (from the shop go out and turn left and you’ll find the signs). Also we had meant to purchase our national park tickets, as I had read that they can get checked along the way, but they don’t actually start charging until the 1st of April, and we were walking 30th & 31st of March (#winning). The lady also told us the usual route was closed, which I already knew about as I’d spent quite a bit of time before researching the walks, how to find the paths etc. So from Riomaggiore to Manarola we had to take the ‘high path’. I found on all the websites I researched before the trip this one was the most helpful and accurate:

So we took path 531 from Riomaggiore to Manarola (once you find the start you can’t get lost along the way, there is the numbers of the paths signed, red/white flag symbols and arrows with the town names to guide you). Took us about 2 hours, of the 4 walks I would say this one was the 2nd hardest, as you go straight up a big hill and then straight down the other side, and we were carrying our backpacks which had our stuff for the whole 5 day trip (plus my camera gear).

We arrived in Manarola around midday, just in time for lunch! Again we explored around the town for a little and went down to the seafront for a break. When we were ready to head off we headed to the far right side of the bay (if facing the sea) to where a path was built, this is where you are supposed to be able to walk along if it was open, but from the corner of that outlet you could see across to Corniglia (the 3rd and middle town) and you can see the land slide which had caused the closures. From this corner if you follow the signs to the WC up on the hill, and keep going up you will find the signs to follow to Corniglia, which gets you back on to the high path. 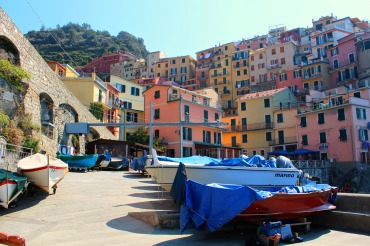 This next part of the walk I found the hardest of the four – maybe because it was the 2nd walk of the day but it also seemed the longest, and the incline went on for a while, and then coming down in to Corniglia was steep as well. We followed trails 6P – 6 – 6D – 7A, but like I said before once you’ve found the start, the signs along the way point you to where you need to go so you don’t need to think about it.

We arrived in Corniglia around 5pm, this is the only town which is not set on the seafront but up on a hill (so had great views), but is about 300 steps up from the train station, so if you’re not walking the paths there is still a little climb, or a local bus will shuttle you from the station to the main square in town. This was the smallest and quietest of the 5 towns. We only stayed here because it was the half way point of the trip so made sense. There was a few options for dinner in the evening, and a few cafes open in the morning for breakfast before heading off. We stayed in a lovely room called Il Timone:

In the Summer it may be more lively (remember we were here March 2017), but if we weren’t walking I probably would have picked one of the bigger towns to stay in overnight (Vernazza was my favourite).

After breakfast we headed back to the point of where we walked into town the day before, as we noted as we walked in the sign to Vernazza (town four) so we knew our starting point for the morning. Again each of the walks on day two probably took about two hours each, and I found these more enjoyable then the first day! I’m not sure if it because they were slightly easier (although still had their ups and down) or if I was just more used to the walking on day two and carrying the backpack. 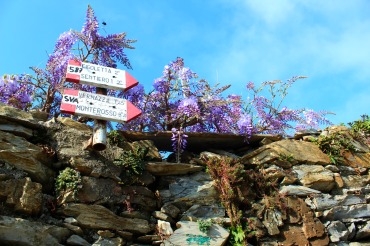 About ½ hr into the walk the path takes you through a small village with a shop selling drinks and snacks and the best view back in the direction of Corniglia. We took path 2C from Corniglia to Vernazza.

Arriving in Vernazza, again around lunch time, we first went for a bit of exploration and an obligatory rest on the rocks at the seafront. This was probably my favourite town of them all. Riomaggiore was very picturesque but because it’s the first town on the train line is was very busy (even in March!) so this was a bit quieter, and still had the stunning colourful terraced house up the hillside from the beach. There was also a small fort on one side of town, and an under cliff passage to a beach on the other side. From the main square at the beach in the back left corner you’ll find a small alleyway with a sign to Monterosso, to get you onto the path to the final town.

We took route 2D, again around 2 hours from Vernazza to get to Monterosso. It was very rewarding reaching the final town, having walked for the two days. Monterosso was probably the least scenic of the 5, as when you stand at the sea front you can’t really see the buildings looking back inland, but because it isn’t restricted to being cramped on a hill, it has a few more winding streets to explore. From Monterosso we caught the regional train straight back to La Spezia to get another train onto Florence (read about it here).
Overall it was a fantastic experience and I would defo do it again! The walks were hard at some points but the views you got along the way lived up to the expectations, and it was stunning! If you didn’t want to walk like I mentioned the regional train does stop at every town, but Russ and I are by no means fitness freaks and we managed fine, just make sure you wear your trainers (I know I can’t believe I didn’t wear flip flops either), or you go could straight to your accommodation to drop your bags and walk back to Riomaggiore one day – and then the other direction to Monterosso the other day (in case you didn’t want to carry the extra weight of your bag).

I was worried in the weeks leading up that it was early in the season, and paths might be closed or the weather might be bad (it was a risk going end of March, and also the national parks website doesn’t get updated as often as the link I mentioned above) but we completely lucked out and had 22 degrees and sunny! It was worth the risk going this time of year, as I can’t imagine it being as enjoyable if the paths were swarming with tourists (some points were quite narrow and you need to wait if someone is coming the other way). It was just the right amount of busy that we passed someone only every now and again, but nice to stop and chat.