Since moving to England I’ve been going to Greece almost every year (perks of working for a Greek company), but I love how there are so many islands, and all of them are different in their own way.

I’ve never spent a whole week in any one (as an adventurer I don’t think there’s enough to keep me entertained for that long) so we opted for a bit of island hopping!

We flew into Skiathos (pay attention Mamma Mia fans) and got straight on the ferry to Alonissos for our first two nights. Alonissos is known for its marine park, something we would have loved to explore a bit, but unfortunately we got hit with bad weather and the tours weren’t running so instead of being stuck inside all day we hired a car (€30) and decided to explore the island for ourselves. It was my first time driving on the other side of the road so I was a bit nervous but these three islands only have one main road and no traffic lights so we managed just fine!

We went to the furthest away point first Gerakas and then made our way back to Alonissos town, stopping at all the beaches along the way. 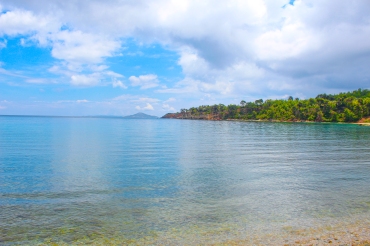 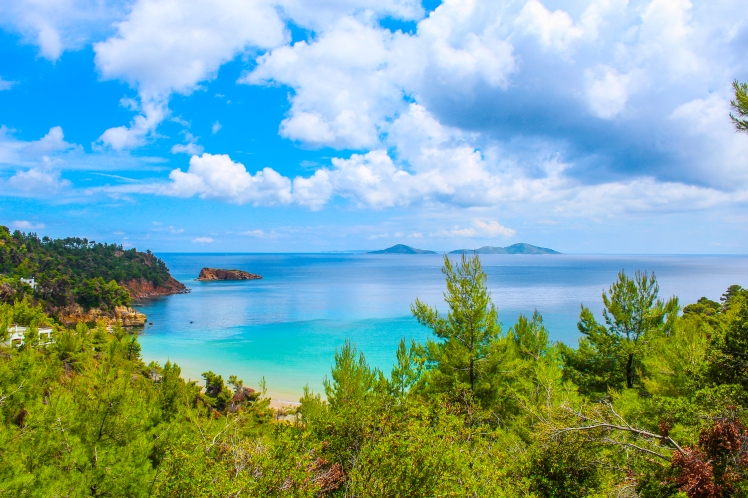 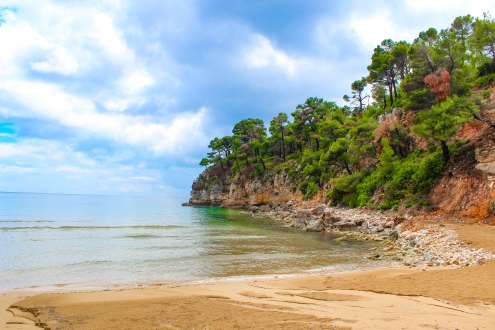 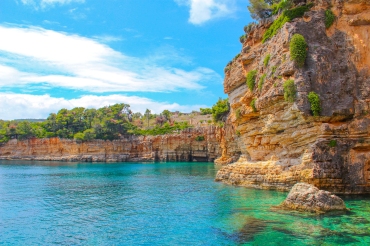 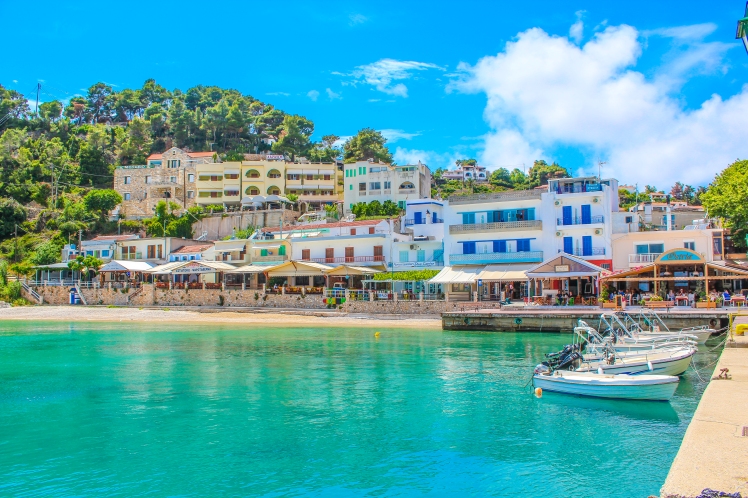 Alonissos town itself is small, a few streets of shops and the harbour with a decent selection of restaurants along the front. We stayed at the Gorgona Apartments, about a 10 minute walk up the hill from the main section of the port. It’s a lovely self-catering property and the owner is very welcoming! 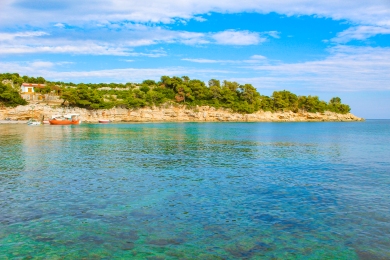 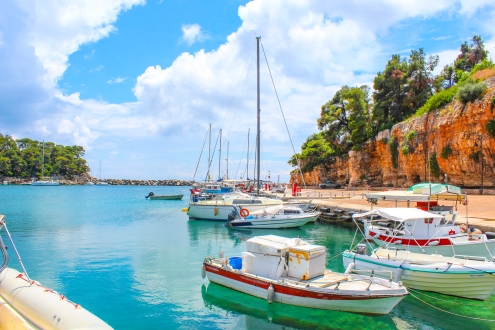 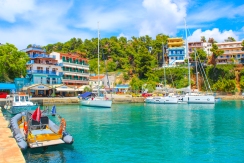 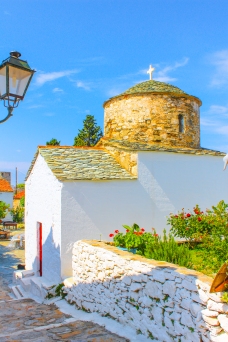 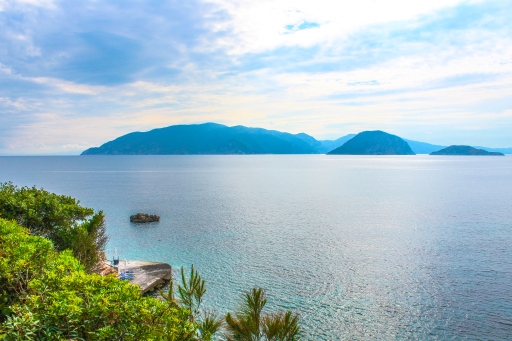 After two nights on Alonissos we got a ferry across to Skopelos. Keep in mind when you book your flights/accom in advance, the ferry times probably won’t be available, the best time to check is a few weeks before you go and then you’ll see all the options. We originally had a 7am ferry as it was the only one showing, and then closer to the time others started appearing, so we were able to book an 11am ferry instead (very cheap we paid €9), but it’s all subject to the weather so don’t stress if you can’t find any info at the time of booking, they will appear later. You can book the tickets online yourself and then in the harbour of each island you can easily find the ticket office to collect your tickets (this way you can select times that suit you).

When we arrived on Skopelos the weather still wasn’t great so we opted again for our self-drive tour! One bookable tour that did catch my eye though was Skopelos Cycle! But we’ll save that for another time. We planned our day out specifically for Skopelos because this is the island where most of the Mamma Mia film was shot. First thing we headed out to the famous church at Agios Ioannis Kastri (we thought we’d beat the tourist buses – so they didn’t ruin our photos). Then again made our way back along the island, stopping and swimming at all the beaches as we went. 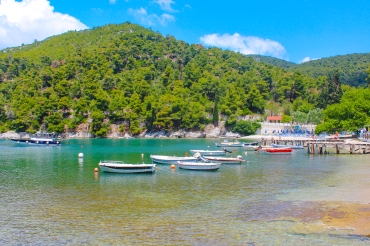 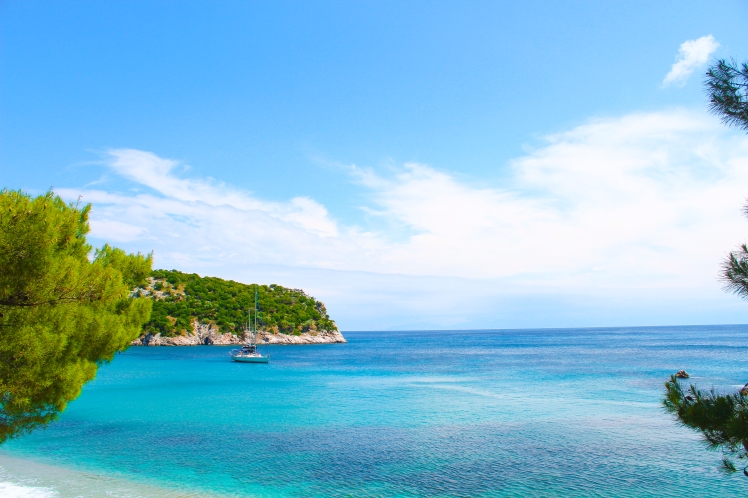 Skopelos town was bigger than Alonissos town, we did spend a good hour or two wandering the streets and looking at the buildings. It was nice also sitting on the long stretch of harbour in the evening sun. We stayed at the Prince Stafylos, a traditionally built hotel almost like a castle! Our room was huge and the breakfast was nice enough. It was about a 10 minute walk to the main bit of town/harbour along the sea front. 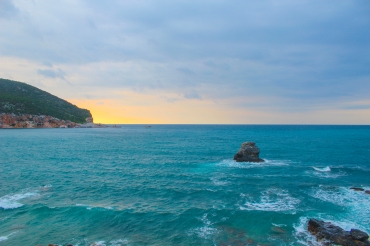 After two nights in Skopelos we headed back to Skiathos on the ferry for our final 3 nights of the trip, and the sun gods blessed the rest of our trip with glorious sunshine! We stayed at the Elsa Studios which is located at the top of Skiathos town, probably a 15 minute walk, but doesn’t feel so long because you can walk half the way along the main street. Here we got a two day car hire, spending the first day checking out all the beaches (beware little banana is a nudist beach!). Skiathos also has a dog shelter located at Ekklisia Panagia Ikonistria, near the Monastery. They let you come and walk the dogs which I think is a fab idea! On day two we just headed back to our favourite beach we found the day before and chilled. If the tour of Skopelos wasn’t enough for the Mamma Mia fans, in Skiathos Town there is an open air movie theatre and 2 or 3 evenings a week they screen Mamma Mia the movie, with a bit of bonus entertainment thrown in as well! (I won’t ruin the surprise). But this was fun, and a great way to spend our final evening of island hopping. After doing this trip Skiathos has become my favourite islands I’ve been to in Greece so far! In the future I’ll be continuing the island hopping way, it really is so convenient to be able to combine 2 or 3 islands in a week (you could do more if travelling longer) – and the ferries make it easy to get between. The possibility and combinations are really left up to you to decide, and if your islands weren’t all in the same group, fly into one island, ferry between and then fly out of another (book one ways). The only advice I would give is in future when I book I think I would allow at least 3 nights on each, only to be covered if you get bad weather on one day. Travelling this time at the end of May/beginning of June I thought it would be hot and perfect, so allowing an extra night would mean if you get unlucky one day, then the next day you’ve got another chance.